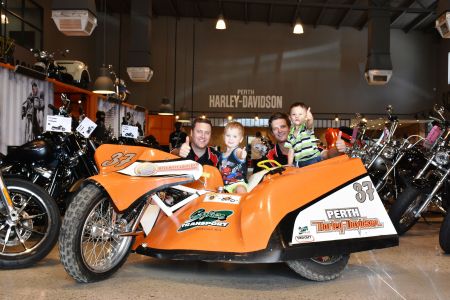 Perth Harley-Davidson are proud to sponsor a range of different people, sports and community activities and this year, we are excited to be a part of the Sidecar Speedway community in the form of Sponsorship for Team 37.

Team 37 is made up of 3 mates – Ron, Scott and Kenny. Ron rides, Scott is the passenger and Kenny is the mechanic.

Ronald Hankin is 26 years old and works in the transport industry at a Rail Terminal in Fremantle. Ron has over 5 years’ experience riding motorcycles and has been competing in Sidecar Speedway for around 6 months. With the upcoming season at Pinjar Park to be his debut in Perth. Ron spends most his spare time either with his family or catching up on sleep. Ron and Scott met at a race meeting a few years ago when Ron was enquiring about getting into the sport. With children the same age and with the same interests it made sense to pursue racing as a team.

Scott Moffat is 35 years old (5 in dog years) and works for himself as a spray painter. Scott has been riding BMX and Motocross all his life and has competed as a passenger in sidecar speedway for 3.5 years. He also has several year’s experience working on cars and bikes. A husband and father to 2 boys a newborn and a 2.5 year old. Scott would love to sleep but his sons keeps him up throughout the night.

Kenny Hankin is 24 years old and works in a warehouse in Welshpool and has been riding motorbikes and mountain bike for all his life. Kenny builds project bikes at home, on the table at the moment is a Vintage 2-Valve JAWA solo bike, which is a replica of his and Ronald’s father’s bike. Kenny plays also plays baseball and has a keen interest in Speedway rarely missing a bike meeting.

The Bike was built in late 2015 by Tony Shield and has only competed in a total of 5 meetings to date, so it’s like new. Built with a 2015 Mitch Chassis and a worked 1989 FZR 1000 Yamaha, this chassis/engine combo saw success at the highest level throughout the 90's and 00’s. The bike is in immaculate condition with polished rims, clean paintwork on the frame and a new sheet-metal floor pan. A freshly designed vinyl wrap for the season and a few Perth Harley-Davidson decals finish the bike off perfectly.

While the team is relatively new to the Sidecar Speedway scene, they have received nothing but positive feedback from big name racers including Clayton Mills, Russell Mitchell & Andy Gajek, Tony Sheild, Jeff Bishop, Scott Charsly and many more.

The team has a unique advantage due to the fact that they are some of youngest competitors in the league. They also come complete with overly positive attitudes and a willingness to give anything a go.

The 2017 Sidecar Speedway Season started in October at the Pinjar Park Motorcycle Speedway.

Back to previous page